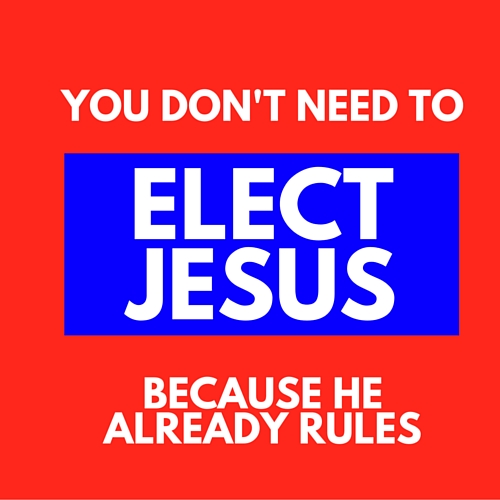 Sometimes I confuse the idea of being a disciple of Jesus with being a campaign manager. I often think instead of doing his will by following Jesus in an intimate way like a true disciple was made to do, I am actually here to promote God by playing politics.

But God isn’t running for office because he doesn’t need to be elected. Even though we often forget this fact, he’s the one who does the electing. He rules whether people would vote for him or not. He’s the Supreme King, not an earthly president.

It’s a dangerous and hurtful message when someone pleads with people to follow Jesus, as though Jesus is in need of people rather than the people being in need of Jesus. God isn’t campaigning. He’s already ruling. Proclaiming this is the Christians’ mission.

God doesn’t need to be sold. He doesn’t sell himself, nor does he hide hard things about himself like a politician trying to improve his poll rating by any means necessary. His word doesn’t skirt “controversial” issues revolving around such things as heaven, hell, one path to salvation, all sin deserving death, marriage being between one man and one woman, the futility of faith without works and works without faith, God’s election and man’s free will, and the list goes on.

As I read through the New Testament Gospels, I am amazed at how differently Jesus sought to make converts compared to our modern tactics. Sure he taught, healed, fed, and was unbelievably kind to people. But he also made it quite clear from the moment people first met him, if they want to follow him, they are going to have to leave everything behind (for some physically but for all spiritually, Luke 18:22); they are going to have to lose their life for him to find life (Matthew 10:39); and by comparison, their love for him should make every other relationship resemble hate (Matthew 10:37).

Jesus didn’t change his pitch from town to town. He didn’t even have a pitch. He simply approached each situation and offered himself, he offered the truth, for he is truth (John 14:6). Jesus is not a chameleon, changing colors to adapt to his surroundings. He is a constant (Hebrews 13:8). People are the variables. He gives people the freedom to love him or hate him, follow him or reject him. All he does is tell the naked truth.

Remember the story in John 6 where Jesus fed the five thousand? He had compassion on thousands of hungry people following him, but then he caused nearly all of those people to abandon him by telling them the plain facts (John 6:66), which they did not like: he is the Son of God, the bread of life, and unless they ate his flesh and drank his blood, they would die.

He taught, healed the sick, and casted out demons. Some towns loved him for this and wanted him to stay with them as long as he could (John 4:40). Other towns asked him to leave (Matthew 8:34).

Jesus wasn’t changing. People’s reactions to him were the variables. So in this election year, if you’re tired of all the politics, refresh yourself with the honesty of Jesus. Read about his life. Love him. Support him. But don’t fall into the trap of trying to sell him or elect him. He’s the King. People need to know that God rules right now. Don’t campaign for God. Proclaim God and his truth.

Just tell the truth in love and let the King worry about the rest.