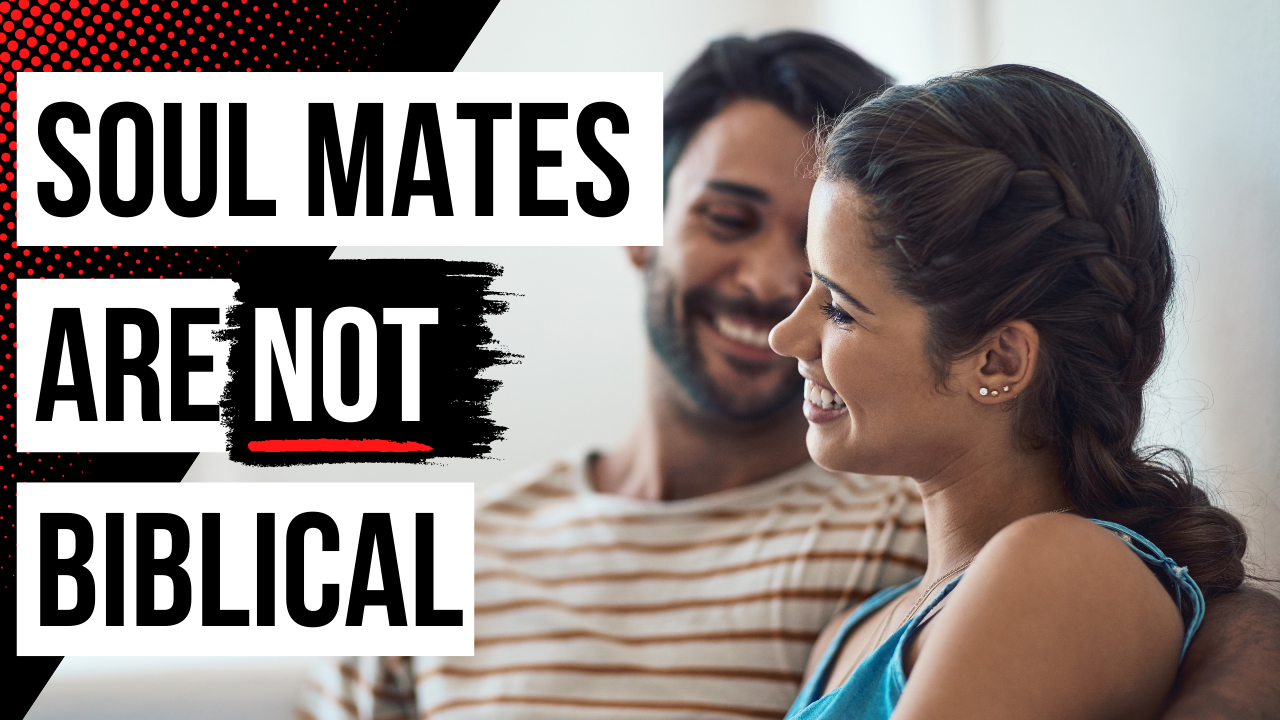 What does the Bible say about soul mates?

Here are 5 reasons I believe the idea of a “soul mate” is not biblical.

1. The Term Soul Mate Means Something Very Different than the Biblical Idea of “The One”

Many people may be surprised to hear me say that I do not believe a “soul mate” is a biblical idea because I have so many teachings about “the one.” But if you really read and watch the content I’ve made about the idea of “the one,” you will see that I’m using this term “the one” to mean something very different than what is commonly meant by the term “soul mate.”

By “the one,” all I mean is “the person God has planned for you to marry.” The reason I believe God plans who you will marry is because the Bible is very clear that God plans everything, “Your eyes saw my unformed substance; in your book were written, every one of them, the days that were formed for me, when as yet there was none of them,” (Psalm 139:16). You can’t pick and choose which part of your life you believe God is sovereign over. He’s either sovereign over everything or he’s sovereign over nothing.

None of this means your choices don’t matter. My point is simply that God has a plan for your future marriage because God always has a plan for everything.

For more on the idea of the one as explained through a biblical lens, you can read What Does the Bible Say About The One?

2. No One Completes a Soul Except Jesus

People say that a soul mate is someone who completes you. They say if you marry someone who is not your soul mate, you will have a bad relationship. The term soul mate also means that there is just one other person in the universe that can complete your soul. These ideas associated with the term “soul mate” are not biblical.

No one completes the human soul and brings full joy except Jesus (Psalm 16:1-2, 11). Additionally, it’s clear that healthy relationships are not about finding your perfect match but rather about finding someone who shares your same biblical values and is willing to live by biblical principles (1 Peter 3:1-7). Also, the Bible does not forbid remarriage in certain cases, such as when it comes to your spouse dying (1 Corinthians 7:39).

One reason people don’t like it when I talk about “the one” and how God sovereignly plans your marriage is because many marriages have sin in them and end in divorce. But since we know God could never plan sin and that he does not want divorce, it seems contradictory to say that God plans these types of marriages that don’t result in a healthy relationship.

But this is an incomplete understanding of God’s sovereignty. While God’s sovereignty can’t be fully known by our human minds, throughout Scripture we can see that while God does not cause sin, he is still sovereign over sin, using sinful choices made by humans to accomplish his ultimate plan (Acts 2:23).

For more on this, you can read my article called, If God Puts Everyone with “The One,” Why Do Divorces Happen?

4. Your Soul Will Be the Same Soul in Heaven, But You Won’t Be Married in Heaven

According to Scripture, marriage oneness reflects the oneness between Christ and his church (Ephesians 5:21-33). This is one of the reasons we will not be married to our earthly spouses once we die (Matthew 22:30). The love that our human marriages reflected will be experienced in full once we die and spend eternity with Christ (if we are saved and believe in Jesus).

This is important to highlight here because the same soul you have now will be the same soul you have in heaven. While we will be perfected, we will not lose our individual identities. So if we needed another person to complete our souls, and we lose that connection in heaven because we are not married, this would mean we would be incomplete forever. Obviously this is unbiblical.

The fact that we will not be married in heaven makes many sad, which reminds me of what C.S. Lewis wrote to a mother who shared her son’s concern about loving Aslan more than Jesus. Aslan was a lion character in Lewis’ series called the Chronicles of Narnia, and Aslan was meant to be a symbolic character representing Jesus. To the mother, Lewis wrote:

Laurence can’t really love Aslan more than Jesus, even if he feels that’s what he is doing. For the things he loves Aslan for doing or saying are simply the things Jesus really did and said. So that when Laurence thinks he is loving Aslan, he is really loving Jesus: and perhaps loving Him more than he ever did before.”1

While we must be careful not to idolize our spouses, loving them more than Jesus, the advice Lewis gave to this child can help us cope with the sadness often associated with the idea of not being married to our spouses in heaven. The love we don’t want to lose from our spouse is really but a reflection of the love we crave to fully have from God. And once we are united with him in eternity, we will have this love fully.

And so the thing we are afraid to lose on earth will actually be fully given to us once we leave this earth.

5. The Idea of a Soul Mate Is Not in the Bible and Is Rooted in Unbiblical Teachings

The main reason I don’t believe in the idea of a soul mate is because it’s nowhere in the Bible and every teaching promoting the concept of a soul mate comes from outside of the Bible, typically from new age sources that rely heavily on personal experiences and spiritualism.

For more information about this topic, here are two related articles:

What Does the Bible Say About a Soul Tie?

What Does the Bible Say About Twin Flames?