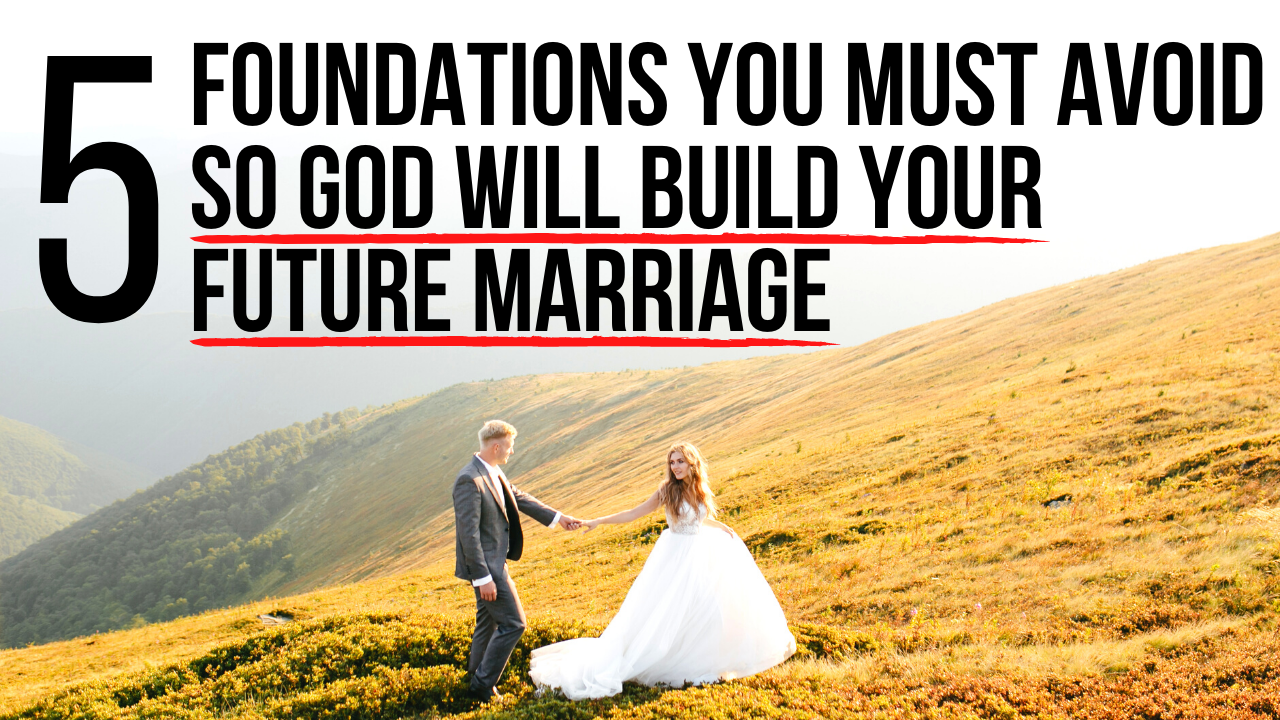 People can try to build their own relationships on poor foundations, but if you want God to truly build your relationship, he will always start by building on a solid foundation.

So here are 5 foundations God will not build a healthy relationship on.

One of the best indicators of future behavior is someone’s past behavior. Therefore, one of the most common ways people end up dating someone who will cheat on them in the future is to start their own relationship out by being unfaithful with this person.

Sometimes it doesn’t even need to be an official relationship. For example, if you start dating someone who was almost about to start dating someone else but then all of a sudden they dropped that person for you, this can be a red flag. This type of situation is not always a red flag, but oftentimes this is what a player does. He or she will make everyone feel like they are liked but then all of a sudden, this person starts dating someone else. If you are that “someone else,” this is often a sign the relationship is being built on a poor foundation.

As Proverbs 6:32 states, “He who commits adultery lacks sense; he who does it destroys himself.”

2. If a Bond Was Formed First Through a Sexual Interaction, This Is a Sign the Relationship Was Built on an Unstable Foundation

One of the reasons sexual sin is so dangerous is because it masks other problems for a while. When you start a relationship off in sexual sin, it keeps you connected to this person for sinful reasons rather than good reasons. When you are connected to someone because you had sex with them, you are willing to overlook all the red flags you would normally see as deal breakers.

One helpful question to ask yourself is, “If I was not emotionally connected to this person because we had sex already, would I still be in this relationship?” Many times, when being honest with yourself, the answer is, “No, if it wasn’t for the bond created because of the sexual intimacy, I would not be with this person.”

When you commit sexual sin with someone, you are sabotaging yourself, for as 1 Corinthians 6:18 states, “Flee from sexual immorality. Every other sin a person commits is outside the body, but the sexually immoral person sins against his own body.”

God wants you to experience sex in a beautiful way with your spouse in marriage one day. But to experience that, you have to forsake the counterfeit.

3. If Someone Is Missionary Dating, This Is a Sign the Relationship Is Being Built on a Weak Foundation

One of the ways many Christians try to find a loophole in the command to not be unequally yoked (2 Corinthians 6:14) is to trick themselves into thinking that as long as they try to witness to their unbelieving boyfriend or girlfriend, God is okay with this relationship.

Things get a lot simpler when we just accept what the Bible says rather than playing mental gymnastics with ourselves to avoid the conviction we sense in our hearts. Evangelism is biblical, but it is unwise to try to convince someone else to obey the Bible while your very relationship with that person is in defiance of what the Bible says.

Yes, there are people who have gotten saved while dating a Christian, but there are always consequences to pay for doing it your way rather than God’s way. God could have saved that person without you becoming unequally yoked. A relationship is always much healthier when people do it God’s way.

Normally, however, these types of dating experiments performed by well-meaning Christians completely blows up in their faces. It is far easier for someone to pull you down than it is for you to pull them up. Notice how 1 Corinthians 15:33 starts, “Do not be deceived: ‘Bad company ruins good morals.’” The temptation is to allow yourself to be deceived so you can date someone with bad character. But as we are warned in this verse, just don’t do it.

For more on this topic you can read my article, Is It Wrong for Christians to Missionary Date an Unbeliever?

4. If You Already Broke Up Once in the Past, This Is Usually a Sign the Relationship Is Not Going to Stand for Long

It’s really common for people to break up and then start again. What is not common is for this second go-around to end differently than the first. What almost always happens is that the relationship ends just like it did the first time or it ends even worse than the first time.

People often get back together because they break up but then don’t setup new boundaries (Proverbs 4:23). It takes time to sever a bond with someone you had feelings for. It takes even longer when you allow yourself to stay closely connected to this person.

For more on this topic, you can read my article, 3 Signs God Is Telling You to Give Someone a Second Chance.

5. If God Clearly Told Someone Not to Date a Certain Person but They Do Anyways, This Is a Sign Their Relationship Is Not Starting on a Good Foundation

God is speaking, but we have a choice to listen. If you want the Lord to build your relationship on a solid foundation, it all starts with willingly obeying God’s leading. For in Matthew 7:24-25, Jesus said:

Everyone then who hears these words of mine and does them will be like a wise man who built his house on the rock. And the rain fell, and the floods came, and the winds blew and beat on that house, but it did not fall, because it had been founded on the rock.”

If you want a loving Christian relationship that will not fall when the rains come, it all starts with putting into practice the words of God.