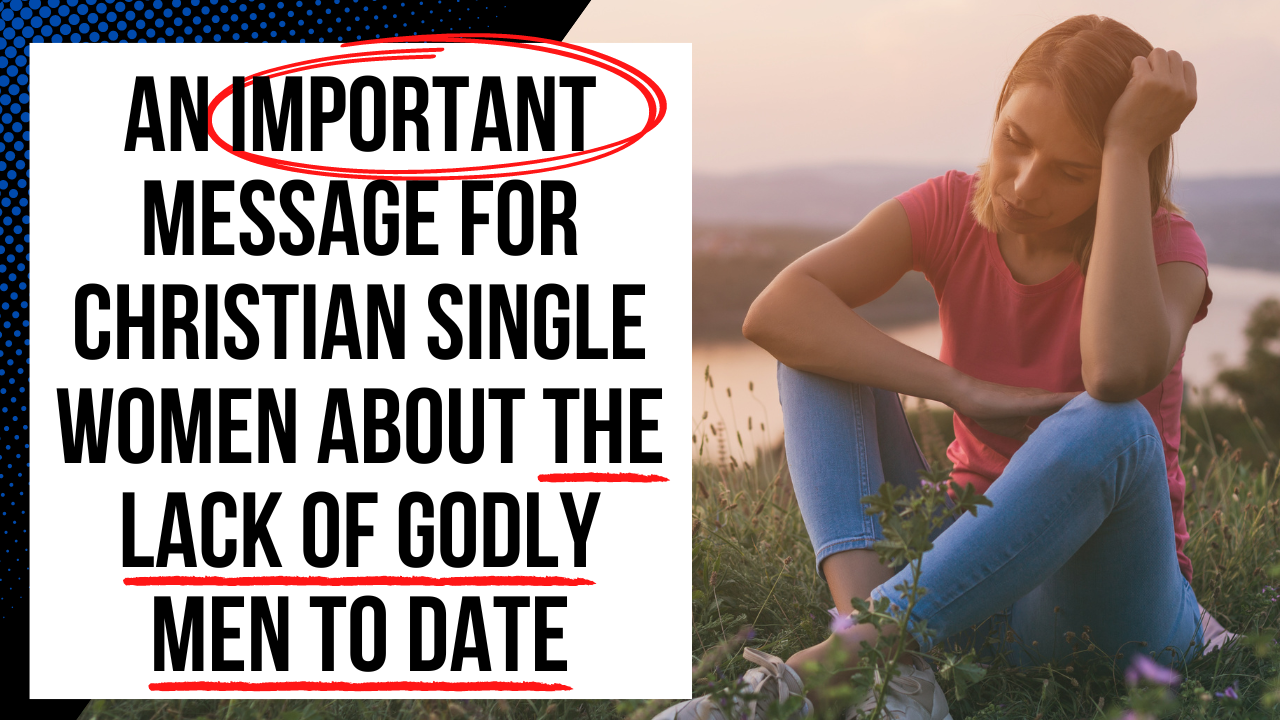 Are you a single Christian woman who feels like there are no Christian men to date? Have you asked, “Where are all the godly men?”

If so, here are 6 biblical things a Christian single woman can do when she lacks relationship options.

1. Submit to God and Put More Faith in His Sovereign Power, Not Less

I’m not here to sugarcoat this. There are more godly women in the church today than there are godly men in the church today. For reasons I won’t fully dive into right now, men truly are under assault. Yes, it’s always going to be difficult for all Christians in this godless world; but for boys to develop into godly men, it is especially difficult these days. And so, let’s not pretend that you as a Christians single woman are not faced with a very hard task in finding a godly man to marry one day.

So what’s the solution? Despair? Giving up? Dating worldly guys and trying to convert them? No. The solution for Christians when they face difficult circumstances is not to decrease their faith but rather to increase their faith. While I will give you some practical things you can do that will help you meet the godly men still out there, we must first come back to God – for only he can truly create the good things you desire (Psalm 103:5).

When the disciples began to realize how impossible it was for them to save themselves, Jesus said to them, “With man this is impossible, but with God all things are possible” (Matthew 19:26).

Likewise, may your understanding about the impossibility of finding a godly man in your own strength motivate you to have more faith in God’s power to do this, not less faith that he can do this, for “with God all things are possible.”

2. Focus More on Solutions than the Problem

But once you have accurately identified your problem, it becomes self-defeating to keep focusing on this issue. Now it’s time to spend your emotional energy on the solutions. Don’t sit around with your girlfriends complaining about how bad men are these days. Don’t train your social media algorithm to keep feeding you feminist garbage that hyper focuses on the loser men out there and ignores the good guys who are still out there.

As Philippians 2:14-16 (NIV) states, “Do everything without grumbling or arguing, so that you may become blameless and pure, ‘children of God without fault in a warped and crooked generation.’ Then you will shine among them like stars in the sky as you hold firmly to the word of life.”

The sea of women out there are complaining about the lack of good men. Be one of those ladies who refuses to complain and is willing to do what she can to help solve the problems facing her.

3. Don’t Use a Lack of Godly Men as an Excuse to Date Godless Guys

I was recently watching a show called My 600-lb Life. As this woman was explaining to the doctor that she was an emotional eater, the doctor lovingly corrected her and basically said “That may be true. You may be an emotional eater. But if you keep using your problems in life as an excuse to eat, you’re going to die.” The woman then said she agreed with the doctor. She was always using her bad childhood, her bad relationships, and the hard things in life as justification to overeat. Her childhood truly was bad, people truly did mistreat her, and her life really was hard. But if she wanted to live, she had to stop using these circumstances as an excuse to eat so much.

We all do this type of thing. In our sin, we are always trying to justify why we keep sinning. It’s easy for Christian women to justify dating godless men because there truly is a lack of godly men pursing them. It seems like the non-Christian guys are always the ones pursuing and the Christian guys are so passive. That may be true. But if you keep using this bad situation as an excuse to sin against God, you’re going to miss the blessings he wants to give you. In Romans 6:1-4, we see there are zero good reasons to do the wrong the thing.

And on a practical level, when you are constantly giving yourself over to worldly men, when a godly man does come into your life, he’s not going to pursue you if you are involved with someone else or still healing from all the bad relationships you’ve been in.

4. Make Sure Your View of Biblical Masculinity Is Accurate

If you don’t know what a biblical man is really supposed to look like, you might see a bunch of godly guys but miss them because you are looking for something different.

Many churches have taught a feminized version of Christianity. They make it seem like the real Christians who love Jesus are the ones who go to church social gatherings, raise their hands during worship and sway back and forth, help out in the children’s ministry, and sit in circles talking to each other about the Bible.

I’m not saying any of those things are bad. They are very good. But those types of things are not designed for men to enjoy. Men don’t like socializing as much as women, they aren’t as expressive during worship, they don’t like sitting in a circle and talking, and they aren’t usually very good at working with children for long periods of time.

I say all of that because if you believe a godly man is going to like the same feminized Christian worship songs being played in the church today, that godly men are going to be extroverted and emotive, and they are going to love going to church events designed for women, you are going to miss the majority of the true godly men out there.

Godly men are still men. They love Jesus just as much as godly women, but they aren’t going to like the same things as women. They will express their Christianity differently. For example, instead of sitting in a circle talking, they would rather be serving and doing something with their hands. Instead of filling out a huge Bible study workbook with 50 questions each week, a man might choose to just read the Bible straight through Genesis to Revelation or listen to it on audio. Instead of wanting to sit in a circle with a bunch of guys, he might just want to sit and talk about the Bible with one older mentor.

All that to say, if you feel like there are no godly men around, just make sure you know what a godly man actually is. If you believe the lies from culture about men or you are in a church that is feminine, you will not be able to see the good men still out there. Look for a man, not a man acting like a woman.

5. Be Visible and Don’t Use the Truth that “Men Should Pursue” as an Excuse to Hide at Home

Sadly, however, since this principle has been drilled into the minds of Christian women, some women use this as an excuse to do nothing but wait to be found.

The Bible does not directly state men should pursue women. Rather, this is a principle we have created by applying the marriage roles of husbands and wives (Ephesians 5:21-33) to the context of dating. The husband is called to lead in marriage, thus it is a good sign a man will be a good leader if he is the one pursuing before marriage. But let’s also apply the wife’s role then to the dating season. A wife is not called to be a mindless passenger on the train. She’s not just sitting there while her husband does everything. Thus it is a poor application of Scripture to tell Christian single women to just sit and wait to be found since this does not accurately represent the role she will play in marriage.

Again, the Bible does not directly command men to pursue in dating. It’s simply a good application of Scripture to say that men should pursue. But don’t stop there. You also have to apply the wife’s role to single women in an appropriate way. Husbands and boyfriends are different and wives and girlfriends are different. So don’t directly apply the roles in marriage to dating. But use wisdom and apply them appropriately so the man and woman can see whether or not they will be able to fulfill the coming marriage roles if they did get married.

As a side note, some say that Proverbs 18:22 is a direct command to men to pursue before dating. It states, “He who finds a wife finds a good thing and obtains favor from the Lord.” The problem with using this as a command to men to pursue is that it forgets what the proverbs are. They are not commands or promises. They are principles. For example, when you read Proverbs 5 about how a man is supposed to avoid the adulterous woman, is this not also directed towards women to avoid adulterous men? If you take Proverbs 18:22 to be a direct command only to men, you have to be consistent and do that for all the other male stated principles in Proverbs. So most of Proverbs would be irrelevant for women. Obviously this is not true.

For more on this, you can read my article called Should a Woman Pursue a Man?

6. Focus on Becoming the Type of Woman a Godly Man Would Want

In the end, you can’t control what men are doing or not doing. The only thing you have control over is yourself. While there truly is a shortage of godly men, it is true that there still are godly men out there.

So the best way to find one of these godly men and to attract one of them is to become a godly woman. Instead of always looking and searching, it’s just as important to make sure you are projecting and sending the right message yourself (2 Timothy 2:22).

So what should you do when you meet a godly man you do like? Here’s an article called 3 Biblical Things a Woman Should Do When She Likes a Man.