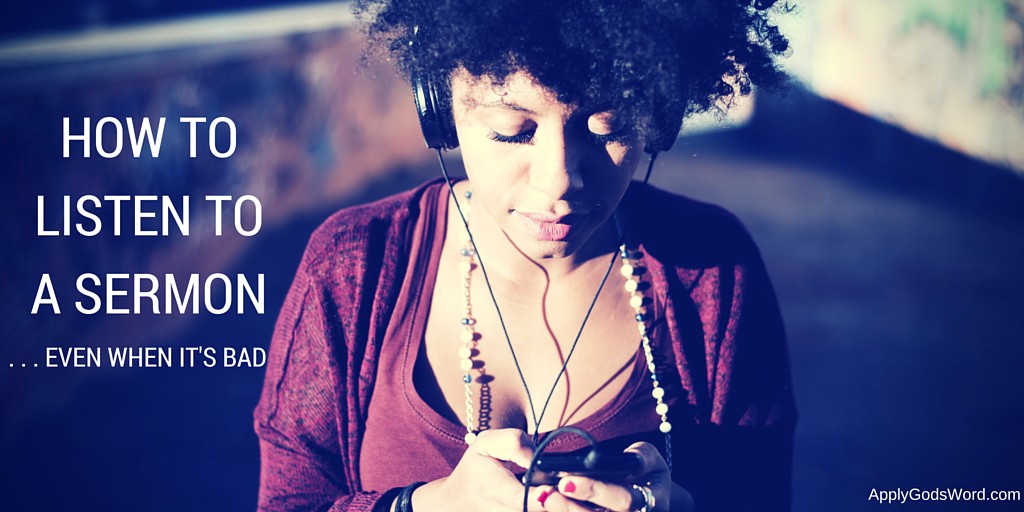 If you are a Christian, you probably have listened to a lot of sermons. For God has ordained that his message found in the Bible should be regularly and publicly communicated through preaching sermons.

It’s truly amazing when you think that even in an entertainment saturated culture such as the America, every Sunday masses of God’s people gather together to listen to a preacher give a sermon out of God’s word. From the moment of the churches birth in Acts 2, all the way up the present time, sermons have been God’s first choice in communicating (besides the Bible) to his people. If sermons are so important, every Christian should take the time to learn how to listen to a sermon.

How to Listen to a Sermon: A Good Sermon Still Needs Good Listeners

When Paul went to Thessalonica , Acts 17:2-3 explains, “As was his custom, Paul went into the synagogue, and on three Sabbath days he reasoned with them from the Scriptures, explaining and proving that the Messiah had to suffer and rise from the dead.” Some in Thessalonica believed Paul’s message, but the vast majority did not and violently persecuted these new believers and Paul (Acts 17:5-9).

As Paul fled, he went to Berea. Acts 17:11-12 explains the stark contrast between those in Berea and Thessalonica, “Now the Berean Jews were of more noble character than those in Thessalonica, for they received the message with great eagerness and examined the Scriptures every day to see if what Paul said was true. As a result, many of them believed, as did also a number of prominent Greek women and many Greek men.”

Paul preached in both Thessalonica and in Berea; in Thessalonica only a few believed while in Berea more believed. Why? The Bereans are described as “of more noble character than those in Thessalonica, for they received the message with great eagerness and examined the Scriptures every day to see if what Paul said was true.” Apparently there is a direct link between “noble character” and being someone who listened to a preacher but then “examined the Scriptures” to see if what was said is true.

When it comes to the different results by Paul in Thessalonica and Berea, the preaching and the sermon were not the problem. The listening to the sermons was the real issue. Here again we can see the importance of learning how to listen to a sermons properly.

We too must be honest with ourselves and not instantly blame the preacher if we feel we are not benefiting from the sermons. Perhaps the problem is with our ability to listen to the sermon well.

How to Listen to a Sermon: Listen to Learn from Scripture, Not Argue Your Opinion with the Preacher

The mark of a bad sermon listener is someone who has no interest in learning and hearing the truth but rather seeks to defend their opinions even if they are unbiblical. They listen with an ear to fight rather than to grow. In the same vein, horrible sermons listeners also seek to hear only what they already know and agree with.

The mark of a good sermon listener, therefore, is one who listens to learn and to know the truth which they are diligently seeking to confirm in Scripture. Good listeners don’t mindlessly listen to anyone who opens the Bible, wears a suit, and steps into a pulpit. They don’t accept the preachers word based on their reputation. They listen and then look in the Scriptures themselves to see if what was said is true, not to argue but to grow. If there current beliefs are challenged, they do not instantly go on the attack. They simply do their best in seeking the truth by going to the word of God to confirm or disprove what the preacher has said.

A good sermon listener can grow even when he or she listens to a bad sermon. The best way to listen to a sermon is to filter it all through the word of God. Even when you listen to a bad sermon, when you are able to confirm its lack of usefulness with what the Bible actually states, you are growing in the process. If the preacher’s message was good but his exposition was poor, you can receive the message while also confirming the truth spoken through your own expositional study of the Scriptures.

The result of listening and then fact checking with the Bible is to truly believe and grow. You will never benefit from listening to sermons if you are not personally committed to examining what you have heard during the sermon.

Good listeners, however, not only validate the sermon through their own personal study of the Scriptures, they then seek to put into action what they have learned. They seek to truly grow after hearing biblical words from a preacher because sermons expounding the message of the Bible are sermons with authority to be obeyed (again, only when they are expounding the message of the Bible).

In summary, to listen well to sermons is to come with a heart ready to learn and grow, not to listen with the intent to argue any point that does not match with your current personal opinion. Second, everything the preacher says must be set against the Scriptures, especially all claims made about Christ. Third, to listen well is to listen for the voice of God, not man. Lastly, good listeners do not listen simply to acquire more knowledge but to apply what they learn through the power of the Holy Spirit.

God speaks through his preachers when his preachers speak what is biblical. After a good listener hears a biblical sermon, like Paul, they should thank God for “the word of God, which is indeed at work in [us] who believe.”

So if Sunday morning has become a religious activity resulting in zero growth, perhaps the problem is not with the skill of the preacher but with your listening. Christians must learn how to listen to sermons well. Therefore, may we all eagerly listen to hear from God.