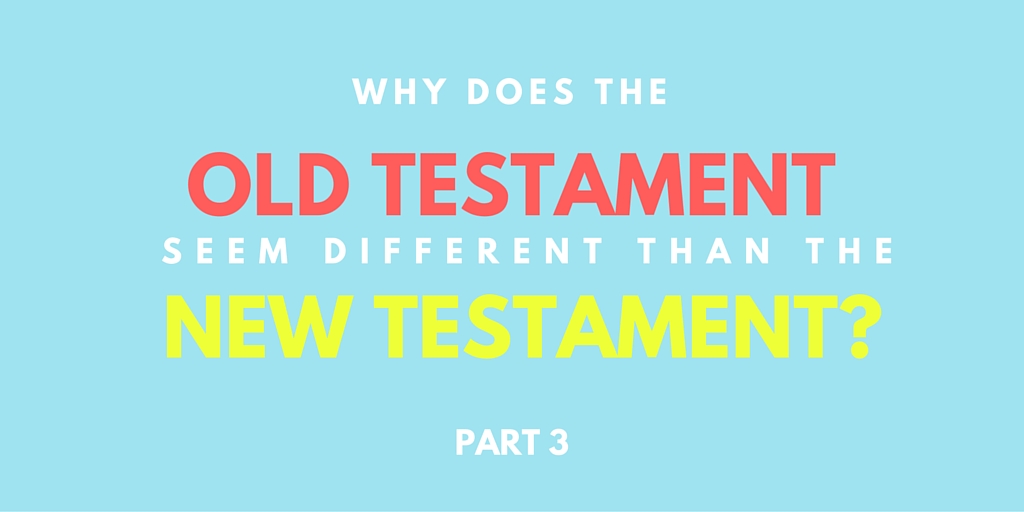 One truth that needs to be kept in mind when reading the Old Testament is that the entire Bible (Old and New Testament) is pointing to one thing: Jesus Christ. When Jesus was on the Emmaus Road, it states of Jesus, “And beginning with Moses and all the Prophets, he interpreted to them in all the Scriptures the things concerning himself” (Luke 24:27).

When we come to a difficult passage, like many of the harsh Old Testament Laws, we should ask ourselves, “How does this passage point to Jesus?”

The Entire Old Testament Points to Jesus and the Gospel

Obviously a lamb doesn’t point to Jesus literally but symbolically. No priest ever said while he was sacrificing a bull, “This bull is pointing to Jesus Christ.” When Joseph was betrayed by his Hebrew brothers and then later rescued them through the events that took place because of this betrayal, Joseph didn’t say, “And all this points to how Jesus Christ will save those who betrayed him.”

Clearly, however, it all does point to Jesus symbolically. The Old Testament is a historical document of events that actually took place. However, according the New Testament, it is also a series of events that were to symbolically show what is really happening spiritually (John 5:39, Hebrews 1:1-3).

Old Testament Laws Were So Harsh Because Death Is Always the Penalty of Sin, Including in the New Testament

One reason God had extremely harsh laws outlining the penalties for sin was to show a physical, symbolic example of the spiritual reality for the penalty of sin. Just as a slaughtered lamb was pointing to Jesus, so was stoning, burning by fire, and other forms of death an example of God’s eternal wrath. (To learn why laws like these no longer apply, click here) 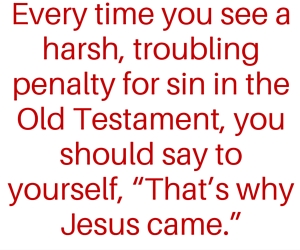 For example, Leviticus 21:9 states, “And the daughter of any priest, if she profanes herself by whoring, profanes her father; she shall be burned with fire.” Obviously this law should no longer be enforced for reasons already discussed in this blog series. But the spiritual reality of a verse like this certainly remains:

For the wages of sin is death, but the free gift of God is eternal life in Christ Jesus our Lord.” (Romans 6:23)

“Rather, be afraid of the One who can destroy both soul and body in hell.” (Matthew 10:28)

“But as for the cowardly, the faithless, the detestable, as for murderers, the sexually immoral, sorcerers, idolaters, and all liars, their portion will be in the lake that burns with fire and sulfur, which is the second death.” (Revelations 21:8)

So although someone who has premarital sex should no longer be burned to death with fire, Leviticus 21:9 points to a spiritual reality that will always remain. All sin deserves death and all who do not take the death of Christ as their substitute will pay for their own sin for eternity.

Every time you see a harsh, troubling penalty for sin in the Old Testament, you should say to yourself, “That’s why Jesus came.”

Jesus came because God loves us. God’s love is not expressed through the removal of penalties for sin because God is a just and holy God. His love is, however, expressed by paying for those sins, “If we confess our sins, he is faithful and just to forgive us our sins and to cleanse us from all unrighteousness” (1 John 1:9). God shows his faithfulness and justice by the substitutionary death of Jesus Christ, which does not erase the harsh penalties for sins but rather pays for the harsh penalty for sins.

God laid out the harsh penalties for sins in the Old Testament and enforced them visibly to give us all fair warning about the spiritual realities that await us all. To have hid the eternal consequences by giving us no physical warnings about what is ahead would have been deeply cruel.

For those who read the Old Testament and think that God was just mean then, imagine how mean it would be to never give humans any indication of his holy wrath over sin and then surprise them once they meet him in the afterlife. In love, not meanness, did God show us all our spiritual reality through physical, symbolic expressions in the Old Testament. He’s given us all a clear picture of his holiness and offense at unholiness. After reading the Old Testament, no one can say they didn’t know that God’s wrath over sin was severe. No one can now say they didn’t know they needed a great sacrifice, Jesus, to atone for their sins.

The law was never given to save us from our sins. The law was given to awaken us to the reality of our sin, to show us the penalty we owe because of our sin, and thus the need for Jesus Christ to graciously save us through faith:

So why are the Old Testament laws so harsh? To show that the penalty for sin is still extremely unbearable, and thus we all need Jesus Christ.