In the Scriptures, there is no king who was the apple of God’s eye like David. The heart of God had a special affection for the man who was later described by the Lord as, “a man after my heart, who will do all my will.” (Acts 13:22). A Bible study on the life of David, however, would not reveal a perfect man, but rather a man who failed and sinned in many ways. So the questions must be asked, Why did God love and bless David so much?

God Loved David So Much Because God Chose David

There are many answers that could be given that would not be wrong: David was courageous, he was passionate for the Lord, he was obedient to the Lord, he was a worshipper of God, he was repentant when he sinned, he had great character, and he had a zeal for building the Lord a house. But if you had to pick the most fundamental, core reason for why God loved and blessed David so much it would simply be this: Because God chose him.

As tempting as it is to idolize the life of David and exalt his exploits, believing that if we just do what David did God will bless us like he blessed David, there is a great danger in doing so. Why? Because, ultimately, God’s favor on David’s life was not based on David’s actions. If it was, God’s favor would have been lost once David sinned with Bathsheba (2 Samuel 11) or counted the fighting men (2 Samuel 24) or once he did one of the many other things with which God was not pleased (Psalm 32). Ultimately, David and God’s relationship is best understood through the lens of grace.

God Loved David So Much Because God Anointed David

Notice that first real details we get about the life of David (besides his ancestral line in Ruth 4 and an inference in 1 Samuel 13:14) occurs in 1 Samuel 16 where God directs Samuel regarding David, “‘Fill your horn with oil, and go. I will send you to Jesse the Bethlehemite, for I have provided for myself a king among his sons.’ . . . 13Then Samuel took the horn of oil and anointed him in the midst of his brothers. And the Spirit of the LORD rushed upon David from that day forward” (1 Samuel 16:1, 13).

God “provided for [himself] a king” among Jesse’s sons. God anointed David before David did anything worthy of note. The Spirit of the Lord rushed upon David, and only then did he later kill Goliath, lead military campaigns, write psalms, plan for the building of the temple, and provide the lineage through which Jesus would be born.

When David repented in Psalm 51 of his adultery with Bathsheba, the opening lines of Psalm 51:1 state, “Have mercy on me, O God, according to your steadfast love; according to your abundant mercy blot out my transgressions.” David knows he was chosen by God because of God’s abundant, undeserved love; therefore he knows that he will only be forgiven and sustained by the same means. David doesn’t appeal to anything he’s done, but rather appeals to the very nature of who God is. Thus throughout his life, David would appeal to God, not his own rights, for God’s favor to remain on him, “Keep me as the apple of your eye” (Psalm 17:8). David was dependent upon God’s character, not his own. 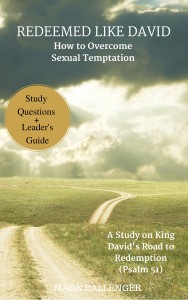 All of this is important to take into our hearts if we too want to be people after God’s own heart. Obedience is commanded by God, but obedience is not the foundation for God’s favor and love. Of King Josiah it states, “Before him there was no king like him, who turned to the LORD with all his heart and with all his soul and with all his might, according to all the Law of Moses, nor did any like him arise after him” (2 Kings 23:25). Josiah obeyed God in ways David didn’t (like by reinstating the Passover, 2 Kings 23:22-23).

So why didn’t God elevate Josiah over David, since Josiah is not even mentioned in the entire New Testament besides a brief mention in Jesus’ lineage (Matthew 1:10-11)? Answer, because God chose David. If God’s gifts were based in man’s works, Josiah would be more noteworthy than David. But the point of David’s life that God’s is telling us to pursue is not David’s exploits but God’s undeserved, unfailing grace and love. God is telling us to seek the grace he gave David, not the works David did, as these are the result of God’s grace.

If we want a relationship with God like David, to be blessed by God like David, then we must ask for and seek the grace of God that was given to David. Obedience is to be commended and sought after. But sustained obedience is the result of God’s favor, not the cause. Above obedience all Christians should seek the undeserved favor, blessings, love, and grace of God. David didn’t deserve any of the good that he received. It was because of the character and faithfulness of God that he was blessed so abundantly, and the same is true of all Christians.

You have said, “I have made a covenant with my chosen one;
I have sworn to David my servant:
4 ‘I will establish your offspring forever,
and build your throne for all generations.’” (Psalm 89:3-4, emphasis mine)

I have found David, my servant;
with my holy oil I have anointed him,
21 so that my hand shall be established with him;
my arm also shall strengthen him. (Psalm 89:20-21, emphasis mine)