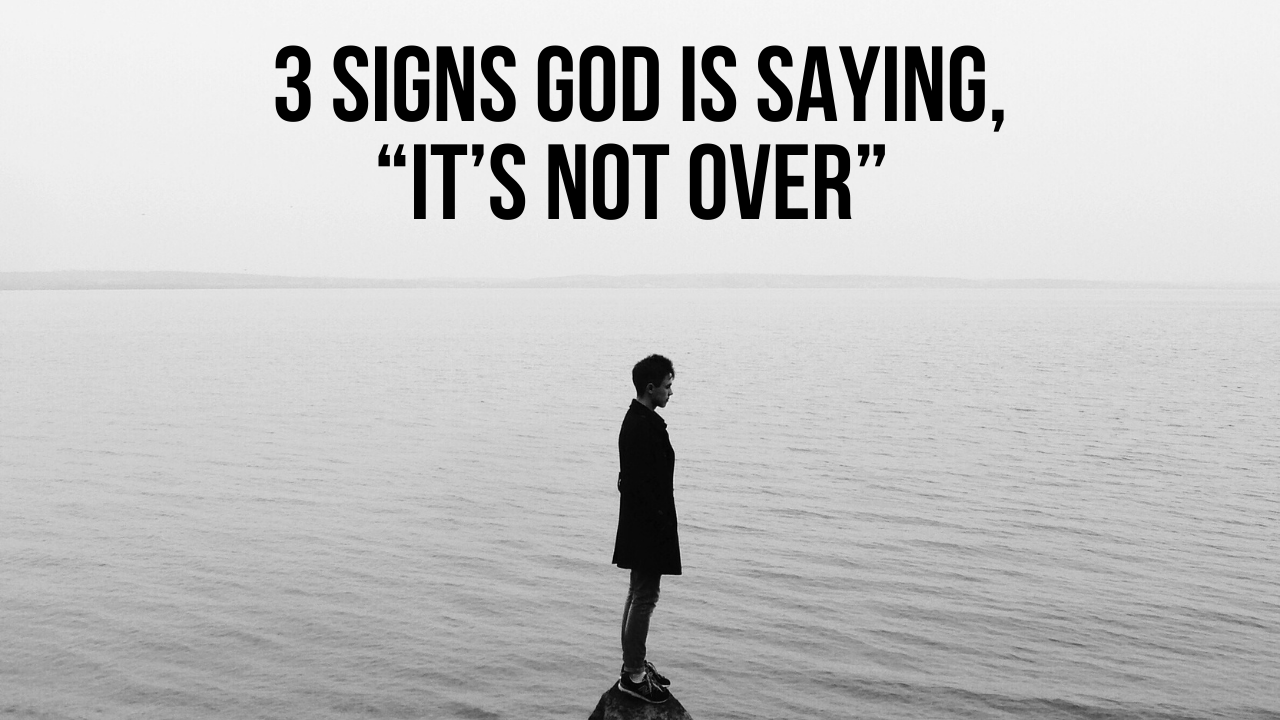 While this article is mainly talking about relationships, the principles listed here could also be applied to a job, a church, or non-romantic relationships as well.

With that in mind, here are 3 signs that often mean God is saying, “It’s not over.”

1. If a Trial Is Causing Progression Rather than Dissension, This Is a Sign God Is Saying, “It’s Not Over”

In Acts 15:36-41, we are told that Paul and Barnabas had a split over their disagreement about Mark. Paul felt Mark was not fit to travel with them because in the past he abandoned them on their journey, but Barnabas wanted to give him another chance. At this point in the story, they couldn’t see eye to eye, so they went their separate ways, Barnabas taking Mark and Paul taking Silas.

But somewhere along the line, God must have spoken to Paul and said something like, “It’s not over.” Why? Because in 2 Timothy 4:11, Paul wrote, “Get Mark and bring him with you, for he is very useful to me for ministry.” We don’t know all the details that led to this reconciliation, but clearly the dissension was not permanent and this disagreement eventually let to progression.

Likewise, trials and disagreements happen in relationships all the time. Sometimes these trials cause splits that last for good and sometimes these splits are only temporary. The way you will know the difference is by the presence of progression occurring through the issue that is happening.

If the dissension remains, it really is over. But if progression is occurring between you two because of this issue, this is a sign God is saying, “It’s not over.”

2. If Both You and the Other Side Are Willing to Work Through the Barriers, This Is a Sign God Is Saying, “It’s Not Over”

For progression to occur in a relationship, there must be mutual willingness. If the willingness to get past the barriers is only one-sided, this relationship really is over. For example:

So you have to be sober-minded (1 Peter 5:8) about the effects an issue is having. In dating, you must be careful you are not giving grace in ways that is unfit for dating. In other words, there certainly are very good reasons a non-married couple should accept that their relationship should be over. When you offer endless chances and stay together in dating, you often get trapped in an unhealthy relationship.

However, if both sides are willing to work through something and there is good fruit happening because of this (Ephesians 4:15-16), this is a sign God is saying, “It’s not over.”

3. If You Are Longing for Something that Is Actually Rooted in the Next Life, This Is a Sign God Is Saying, “It’s Not Over

Sometimes an earthly expression of a heavenly desire does truly come to an end, but the desire in which this earthly expression was pointing towards will never end. In other words, there are some desires on earth that are merely pointing us towards what we long for in Christ.

Relationships are meant to bring love into our lives, but ultimately human love is but a reflection of Divine love (Ephesians 5:1-2, 32). When human love ends, we must remember what God says about his love:

Everything your heart craves will one day be fully satisfied in the manifest presence of God himself (Revelations 21:1-4).