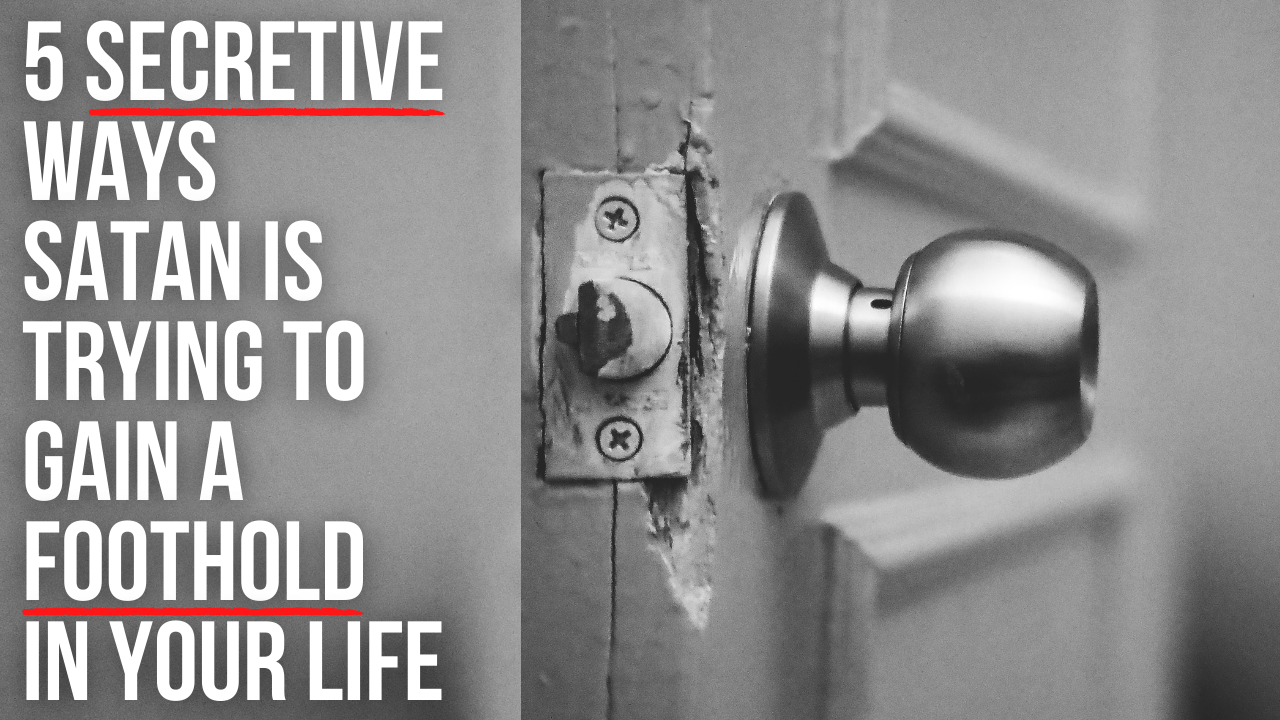 Here are 5 ways the enemy will try to gain in foothold in your life without you even noticing it.

1. Satan Secretly Attacks Through Our Relationships with Other Humans

Balaam was an evil prophet who sought to do evil against the Israelites. Notice what Moses said in Numbers 31:15-16 (NIV), which states:

‘Have you allowed all the women to live?’ he asked them. ‘They were the ones who followed Balaam’s advice and enticed the Israelites to be unfaithful to the Lord in the Peor incident, so that a plague struck the Lord’s people.’”

As Christians, we should not view unbelievers as our enemy, but we should always recognize that unbelievers are vessels for use by our real enemy. Ephesians 6:12 says our battle is not against flesh and blood but against spiritual forces of evil. Ephesians 2:2 states that Satan is “the spirit that is now at work in the sons of disobedience.” And in John 8:44 Jesus said to unbelievers, “You are of your father the devil, and your will is to do your father’s desires.”

Therefore, it’s clear that if Satan wants to hurt Christians, he will do so through using non-Christians.

2. Satan Secretly Attacks By Tempting You to Get Burned Out Through Doing Good Things

Notice that in Numbers 12:3, it says Moses was the humblest man in all the earth. But when God told Moses to speak to the rock to produce water for the people, Moses pridefully struck the rock twice, drawing attention to himself rather than to God. In Numbers 20:10, Moses said, “Hear now, you rebels: shall we bring water for you out of this rock?”

Again, he referred to himself bringing water from the rock rather than God. This was out of character for Moses, and we can infer that his anger towards the people is what drove him to disobey the Lord, for Psalm 106:32-33 states the people, “made [Moses’] spirit bitter, and he spoke rashly with his lips.”

Moses was doing a good thing for the Lord by leading the people of Israel. But Moses allowed himself to get drained by this people he was called to serve, and through his mishandling of his calling to lead the people, he sinned and hurt his walk with God.

Satan will seek to attack Christians in the same way. He will tempt us to become so busy doing “good things” that we get drained, and in our weakness we then often turn from God.

3. Satan Secretly Attacks By Tempting Us to Replace Our Relationship with Jesus with Religion

When the human mind thinks of Satan, we usually imagine cults, chanting around a fire, demonic possession, and other overtly evil things. But it is far more likely that Satan will attack Christians while wearing camouflage.

Religion is often this camouflage which Satan seeks to use. Religion appears to be of God but so often it is actually a twisting of what God wants, having some truth and some lies mixed together. But as Colossians 2:23 explains, “These have indeed an appearance of wisdom in promoting self-made religion and asceticism and severity to the body, but they are of no value in stopping the indulgence of the flesh.”

It’s human nature to assume that “normal equals right.” Herd mentality is a real thing. When we see lots of people going in one direction, we naturally want to join them in going that direction. In marketing there is something called “social proof.” When we see lots of people buying something or lots of positive reviews on a product, we are more influenced by this “social proof” to buy it ourselves.

This is how Peter and Barnabas were led astray until Paul corrected them. In Galatians 2:11-14, Paul states that Peter was eating with the Gentiles. But then when some Jews came, Peter separated himself and would not eat with the Gentiles anymore, and then “the rest of the Jews acted hypocritically along with him, so that even Barnabas was led astray by their hypocrisy,” (Galatians 2:13). In Galatians 2:15-21, Paul explains that their actions were not in line with the gospel because they were living according to the law and not by faith.

Satan will seek to attack us through this need in us for “herd mentality.” Despite our human nature leading us to want to follow the crowd and join the majority, we must remember that “normal” does not always equal right. Just because something is normal does not make it automatically ethical.

Satan wants you to follow the crowd and ignore the Scriptures.

Notice that in James 4:6-10 and 1 Peter 5:6-11, there is both a reference to humility, pride, and Satan. Therefore, to battle the enemy, be humble, submitting to God, resisting the devil, for God opposes the proud but gives grace to the humble.