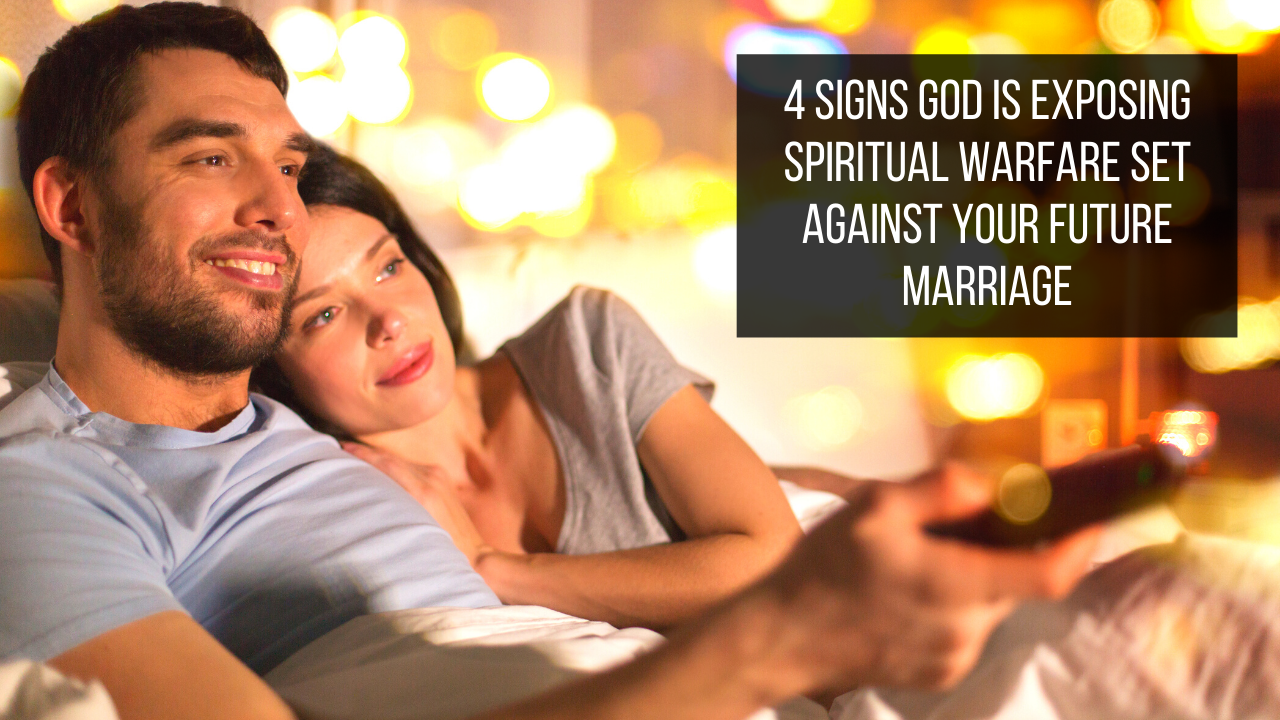 Here are 4 signs God is pointing out areas in your life that Satan is attacking in order to corrupt or even prevent your future marriage.

1. If God Is Opening Your Eyes to How Much Satan Truly Hates Godly Marriages, This Is a Sign the Lord Is Helping You See Spiritual Warfare Set Against Your Hope for a Godly Marriage

Perhaps you clicked on this article and thought something like, “Really Mark? Doesn’t Satan have better things to do than worry about my relationship status?” While it could seem trivial to some, there are few things the devil hates more than a godly marriage. Why? Because Satan hates God most of all, and God is the one who made marriage to bring himself glory. Therefore, it is clear Satan hates it.

Right from the beginning of the human story, Satan’s hatred of God could be seen in his attacks on husbands and wives. So much could be said about how Satan attacked Adam and Eve’s relationship, but for now it suffices to say that we must first just acknowledge that of all the things the devil could have done, what he chose to do was to attack God’s first husband and wife. Notice the characters involved in the fall of humanity:

[The Lord] said, ‘Who told you that you were naked? Have you eaten of the tree of which I commanded you not to eat?’ The man said, ‘The woman whom you gave to be with me, she gave me fruit of the tree, and I ate.’ Then the Lord God said to the woman, ‘What is this that you have done?’ The woman said, ‘The serpent deceived me, and I ate.’” (Genesis 3:11-13)

The Lord, a husband, a wife, and the devil – these are the characters present right at the beginning of the story. Right from the start, in his hatred of God, Satan attacked a husband and wife. This tactic of Satan continues today. Through Jesus Christ, God first desires to transform the heart of an individual. But for many of his people, he then wants to restore what was lost by forming new godly marriages too. Just like at the beginning, Satan will do whatever he can to prevent this.

So if God is showing you these truths and exposing to you how much Satan truly hates marriage, this is a sign the Lord is shining a light on any spiritual warfare set against your future marriage as well.

2. If God Is Showing You that You Have Believed Unbiblical Lies About Masculinity and Femininity, This Is a Sign the Lord Is Exposing Spiritual Warfare Set Against Your Hope for a Godly Marriage

Whatever view you have, my point here is to encourage you to make sure your beliefs about this topic are rooted in Scripture rather than in the secular world’s opinion, for the world is actually just a puppet in Satan’s hands. 1 John 5:19 states, “We know that we are from God, and the whole world lies in the power of the evil one.” Satan hates God’s design of men and women because they are both made in the image of God, “So God created man in his own image, in the image of God he created him; male and female he created them” (Genesis 1:27).

The devil doesn’t care how you view men and women as long as you don’t view them the way God wants you to view them. Satan is fine with passive men who want a woman to lead them. Satan is fine with aggressive men who want to dominate women. He just doesn’t want you to be a man who leads through sacrificially laying down your life for others. Satan is fine with you being a mindless woman who finds her worth in men. He is fine with you being a domineering woman who hates men and finds joy in disrespecting them. He just does not want you to be a woman who is so strong that she can be vulnerable and kind even when the world around her is harsh and underserving of her beauty.

If you’ve swallowed the devil’s lies about men and women like the rest of the world has, you are falling for his tricks meant to corrupt your future marriage. If you want to have a godly marriage one day, you have to rediscover God’s design outlined in Scripture of men and women who both bear his image.

3. If God Is Showing You Someone Who Wants to Be with You but Is Only Pretending to Be a Servant of Christ, This Is a Sign the Lord Is Exposing Spiritual Warfare Meant to Hinder Your Future Marriage

The first two points were really about our beliefs and thoughts. But Satan not only will try to attack your relationships by corrupting you with lies, he will also try to stop godly relationships from forming in your life by helping bad relationships start in your life. Notice the parable Jesus told us about the wheat and the weeds:

And the servants of the master of the house came and said to him, ‘Master, did you not sow good seed in your field? How then does it have weeds?’ He said to them, ‘An enemy has done this.’” (Matthew 13:27-28)

Jesus goes on to explain that at the end of the age God will separate the weeds from the wheat, which means he will separate Christians from non-Christians for eternity. But my point in brining this up is to show you that one common tactic the enemy uses is to bring weeds into your life. In other words, to prevent you from growing in good relationships, Satan will try to get you mixed up in relationships he knows are bad for you. Notice what Paul said in 2 Corinthians 11:14-15. It states:

And no wonder, for even Satan disguises himself as an angel of light. So it is no surprise if his servants, also, disguise themselves as servants of righteousness. Their end will correspond to their deeds.”

Don’t be fooled by the devil. If you want to experience a godly marriage one day, you have to reject ungodly relationships in your season of singleness.

4. If God Is Showing You That You Have Been Falling to Pride and a Lack of Submission in the Area of Relationships, This Is a Sign He Is Exposing Spiritual Warfare Set Against Your Future Marriage

Perhaps one of the most helpful Bible verses about defeating the devil is found in James 4:6-7. It states,

‘God opposes the proud but gives grace to the humble.’ Submit yourselves therefore to God. Resist the devil, and he will flee from you.”

Satan wants you proud and defiant because he knows when you are humble and submissive, he can’t touch you. Therefore, if God is helping you repent of any ungodly pride or a lack of submission in the area of relationships in your life, this is a sign the Lord is empowering you to overcome the attacks of the enemy set against you and your future marriage.