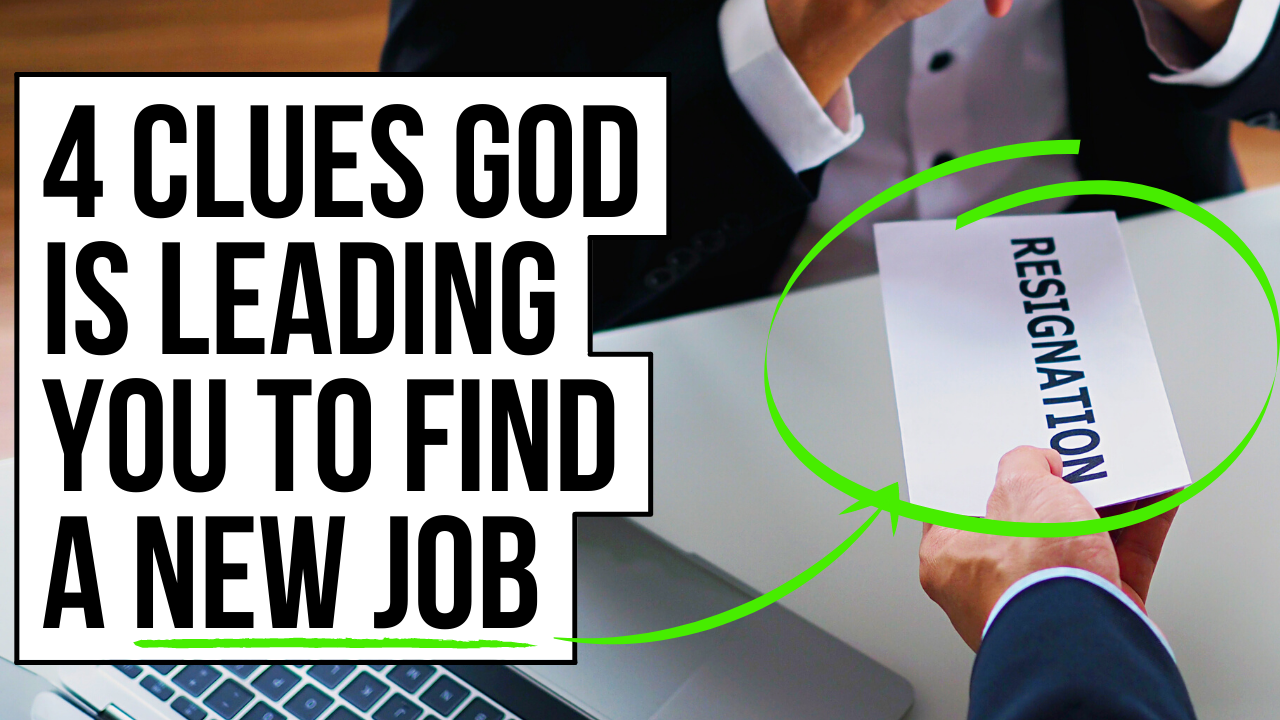 Is God leading you to find a new job? Here are 4 tips to help you answer that question.

1. If Your Attempts to Try to Make Your Workplace Better Have Actually Made Things Worse, Usually This Means God Is Telling You to Switch Jobs

Christians should not be quick to run from problems. God often calls us into chaotic situations so he can use us to bring order. As a witness to Jesus, a Christian often shines the brightest when placed in dark places.

With that said, Christians are not called to endlessly suffer in situations where other people don’t want our help. When Jesus told his disciples to go and preach the gospel to different towns, he told them to leave a town if those people were unwilling to receive their help (Matthew 10:14).

Perhaps the biggest mass career change in human history occurred when Israel was led out of Egypt by Moses. The Israelites all had jobs that they hated when they were in slavery to Pharaoh. When Moses went to Pharaoh to make it better, their jobs actually got worse. In response to Moses, Pharaoh ordered that they Israelites would now have to gather their own straw to make bricks but they would be required to make the same number of bricks as they were making when Pharaoh was supplying them with the straw (Exodus 5:5-9).

Before God led the people out of Egypt, he let things get worse when they tried to make things better. Likewise, if you’ve talked to your boss or tried to compromise with your coworkers but your work environment has just gotten even worse because of this, usually this means God is telling you to look for a new job.

2. If You’ve Learned All that You Can Learn and Now You Are No Longer Growing in This Position, This Often Means God Is Telling You to Switch Positions

You’re never truly standing still. You are either growing or regressing.

When you look at the life of Moses, you can basically divide it into three 40-year sections. From birth to age 40, Moses lived under Pharoah’s roof because his daughter adopted him (Acts 7:23). From age 40 to 80, Moses lived in Midian as a shepherd (Acts 7:30). And from age 80 to 120, Moses led God’s people out of Egypt and wandered the wilderness before God brought them to the Promised Land (Acts 7:36).

When you really think about it, the first two phases of Moses’ life prepared him for the last phase. By living as an Egyptian for his first 40 years, he learned a lot of valuable information God later used when Moses was called to lead the people out of Egypt. By being a shepherd in the wilderness for 40 years, Moses learned a lot about survival and taking care of a large group of lives who needed his care.

3. If Your Workplace Is Becoming Hostile Towards Jesus Rather than Remaining Neutral Towards Jesus, This Often Means God Is Telling You to Switch Jobs

You shouldn’t expect your secular workplace to allow all their employees to use company time to share their religious beliefs. All you can really hope for in the secular workplace is to be treated fairly and equally. Sadly, many employers are no longer just neutral towards Jesus, treating Christianity just like any other religion. Now many employers are actively hostile to Christian principles and towards the name of Jesus.

Perhaps God wants you to stay in this place of employment so he can use your sacrifice to deliver you into an even better position like he did with Daniel. In Daniel 6, his workplace was changing a lot. Previously the king allowed Daniel to worship his God freely. But then Daniel’s enemies influenced the king to make a law prohibiting anyone, including Daniel, from worshipping anyone besides the king himself. I love the boldness of Daniel outlined in Daniel 6:10, which states:

When Daniel knew that the document had been signed, he went to his house where he had windows in his upper chamber open toward Jerusalem. He got down on his knees three times a day and prayed and gave thanks before his God, as he had done previously.”

Just know there will be a cost to your defiance. God, however, will honor you (Matthew 10:32-33, James 4:10). Like Daniel, he may even use this situation to lead you to an even better position than the one your enemies are trying to force you out of.

After God delivered Daniel from the lion’s den, the king saw the truth about God and punished Daniel’s enemies and promoted Daniel (Daniel 6:28).

4. If the Pain Stemming from the Drama at Your Current Job Is Causing You to Cry Out in Prayer for a New Job, This Often Means God Is Preparing You for This Very Thing

If the drama and toxic environment at your workplace is causing you to cry out to Jesus for a new job, this may be happening because God is the one leading you out of that place and towards a new job that he has for you (1 John 5:14).